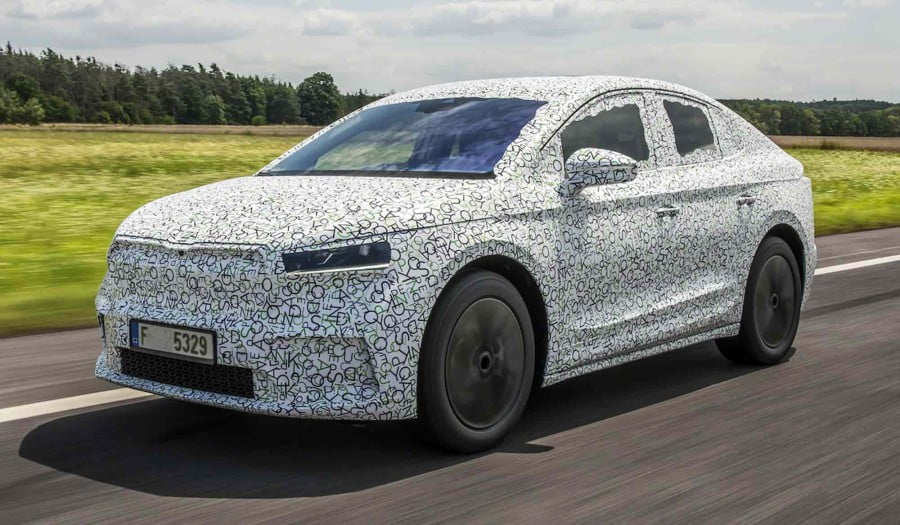 The world famous brand Škoda has shared with the world new teasers of its next charged novelty. We are talking, of course, about an electric car called the Enyaq Coupe iV. And the long-awaited "green" model will become the serial version of the concept car presented earlier (Škoda Vision iV, which was presented in 2019).

If we compare the new transport of this predecessor, then we can safely say that its profile turned out to be more sporty. This means that the luggage compartment of the car has become less spacious (only 570 liters, whereas it was 585 liters). In addition, the manufacturer had to sacrifice the space above the seats in the second row. If we talk about the obvious advantages of an electric car, then we can highlight improved aerodynamics, as well as a large power reserve. Škoda managed to do what its competitors had failed before, namely, to raise the coefficient to 0.234 (at the moment this indicator is the best in the class).

The exterior of the Enyaq Coupe iV turned out to be original. Its important feature is the presence of illumination of the radiator grille. Experts have identified this area with help. 131 LEDs. The designers working in the staff of the Czech company called the result of their efforts the "Crystal Face". Interestingly, in the predecessor of this electric car, the backlight could only be found in the RS modification (and then, it was optional), as well as in the limited edition Founders.

As for the overall dimensions of the coupe-crossover, there were no surprises here. The car became 4 mm. Longer by 1 mm. above. At the same time, Škoda decided not to change the width of the vehicle and its wheelbase. From other important news regarding the Enyaq Coupe iV, it is worth noting the presence of a panoramic roof in the car.