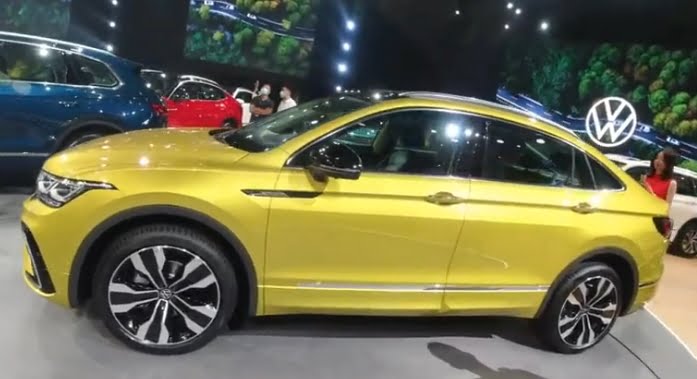 The new Tiguan X was officially unveiled in China, so motorists no longer have to guess what to expect from the latest SAIC-Volkswagen brainchild. The creation of two well-known companies will be mass-produced at the end of this year. It is known that the basic for the Tiguan X was the good old crossover, produced in China with the prefix "L", and in Europe with the prefix "Allspace".

The coupe-shaped car turned out to be relatively elongated. Its length is 4764 mm, height - 1628 mm, width - 1859 mm. The wheelbase is 2791 mm. As for the distance between the axles, the manufacturer decided not to change it. The front of the car also remained the same. Looking from this side at the coupe-like Tiguan, it is difficult not to draw a parallel with the traditional restyled crossover.

As for the head optics, its style is more reminiscent of the optics presented in the Golf series. In addition, the novelty will be able to boast a large radiator grill.

Not without unique highlights, which, first of all, were seen in the R Line modification. We are talking about chrome "horseshoes" framing the bumper, about the enlarged black air intakes with horizontal glossy lamellas.

Working on the Tiguan X, SAIC and Volkswagen decided to experiment with the stern. It turned out to be original from the new car, and not borrowed from the crossover "L". The rear lights, decorated with "games", which are united by a luminous strip crossing the tailgate, turned out to be unusual. Against the background of its predecessor, the Tiguan X will also stand out with modern rear parking sensors (integrated into the reflector), chrome roof rails, an interesting rear bumper decor, and 20-inch rims.