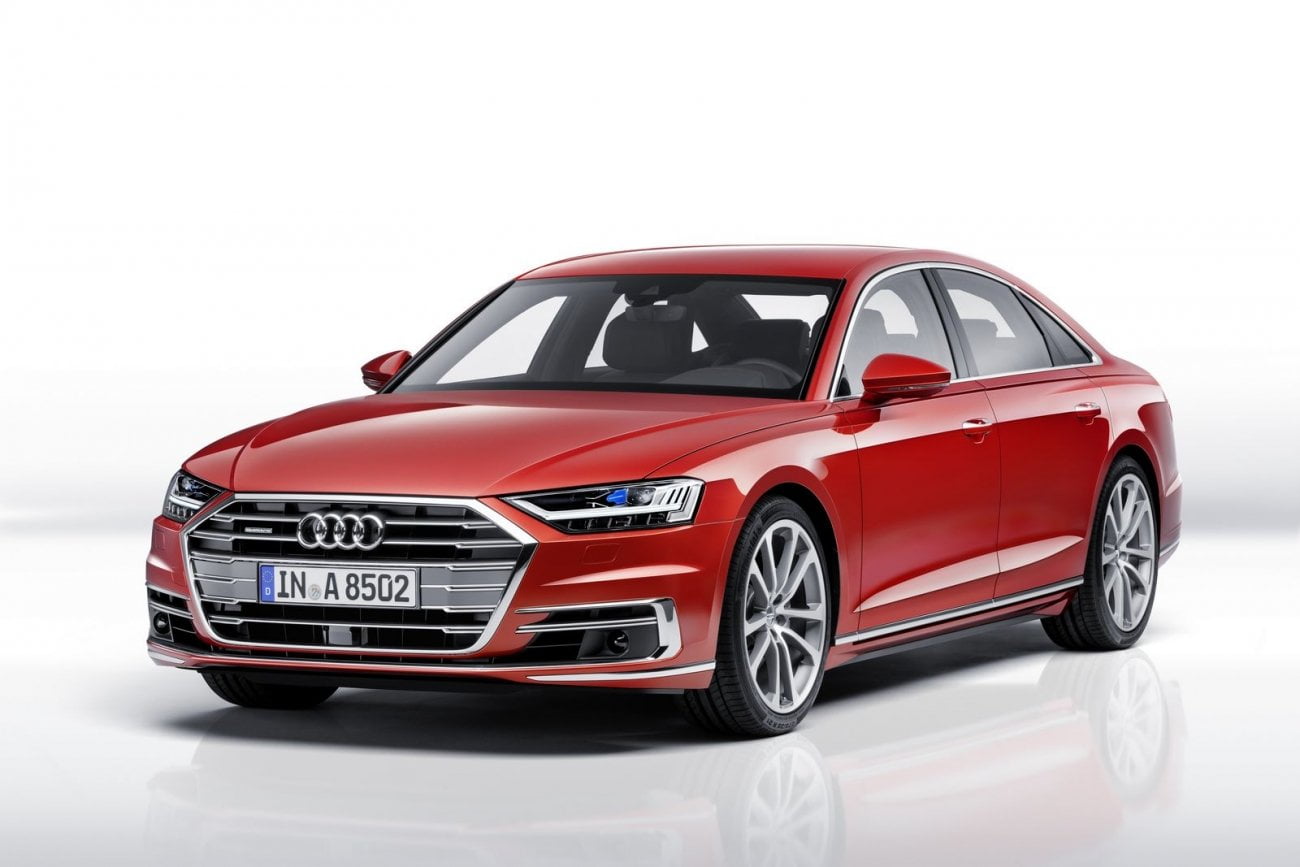 The company Audi presented the flagship model A8 a new generation in the sedan. The car is equipped with the latest technology: an autopilot system in traffic jams, an unusual suspension that can lift the wheels in front of bumps and the body in front of an accident, a car parker (does not need a driver in the cabin), a foot massage function for passengers in the rear row of seats. Changes also touched on the interior design, which is not similar to other variants from the family of the German brand.

Exterior and interior A8 are sustained in the new style of Audi. The model is equipped with a matrix laser headlamps and lanterns on organic light-emitting diodes, and in the cabin there is a central console with two displays and a minimal set of physical buttons. On the upper touch screen with a diagonal of 10,1 inches, the on-board computer readings are displayed, and from the second, having a diagonal of 8,6 inches, climate control is controlled, text information for the navigation system and other data are entered. When pressed, all the touch buttons have a tactile response.

To get into the car, you can use a smartphone supporting the NFC wireless module instead of the key, which should simply be brought to the door handle to open the locks. In addition to the traditional for the premium rear seats with ventilation and massage, as an option, a foot massage is offered. The special unit, mounted in the back of the front seat, supports the heating function with a three-level intensity adjustment and two types of massage. For the front and rear row of seats, the central and door armrests are heated.

The multimedia system and seat adjustment are controlled by a separate removable remote control. It is made in an aluminum case and is equipped with an 5,7-inch screen on organic light-emitting diodes that support FullHD resolution. In addition to this gadget, on the headrests of the front seats are installed tablets with a diagonal of display 10,1 inches, running on Android OS, connected to MMI and having access to the world wide web via Wi-Fi connection. They can be removed and used outside the car.

Also, an ionizer and a special light sensor are built into the rear shelf, which, when the sun shines from behind, sets the installation to change the climate control settings. The sedan is equipped with a dual-scent fragrance system, self-learning navigation, head-up display, plug autopilot and adaptive cruise control. It is also equipped with a Bang & Olufsen audio complex with 23 stereo speakers, wireless smartphone chargers (back and front) and all-round visibility from the passenger compartment.

The autopilot can drive the vehicle, keeping the speed up to 60 km per hour, and also able to react to the non-standard situation on the road if someone jams in front of the car. Representatives of the company Audi argue that the driver may not even hold hands on the handlebars. A special salon camera will monitor its condition: if the driver falls asleep, the electronics will give a loud signal to wake him, and if the reaction does not follow, the autopilot gently brakes the car until it stops. Due to the fact that some changes in the existing legislative provisions are required to implement this system, it will be installed on German Audi cars only from 2019 year.

Perhaps, it is behind the autopilot that the future of the automotive industry, but at the moment the safest option for the car is its Rent with driver. Passing the duties of driving a professional driver, you can safely rest and even take a nap without fear for your safety.

The car parker can without a driver inside the cabin park the car in parallel to other vehicles or drive it into the garage. Running this system and monitoring its operation is performed using the application on the smartphone.

Initially, the German manufacturer is going to supply modifications to the market with diesel and petrol "six", the volume of 3 l and the maximum power of 286 and 340 hp. respectively. Then they promise the release of four-liter "eights", the power of 435 hp. For diesel engine and 460 hp For the petrol. Even in the later version, the sedan will be equipped with an 585-strong W12 engine and a hybrid power unit mild hybrid (MHEV), powered by 449 hp, powered by an 48-volt electrical network. Hybrid is able to accelerate the car on electric traction up to 135 km / h and drive up to 50 km without recharging. The acceleration time to 100 km / h in such a car will be 4,9 seconds.

Sales of new A8 sedans will start in Germany in the fall. Official dealers refer to the indicative prices for the model, which will start from 90,6 thousand euros, and the modifications of L - from 94,1 thousand euros.