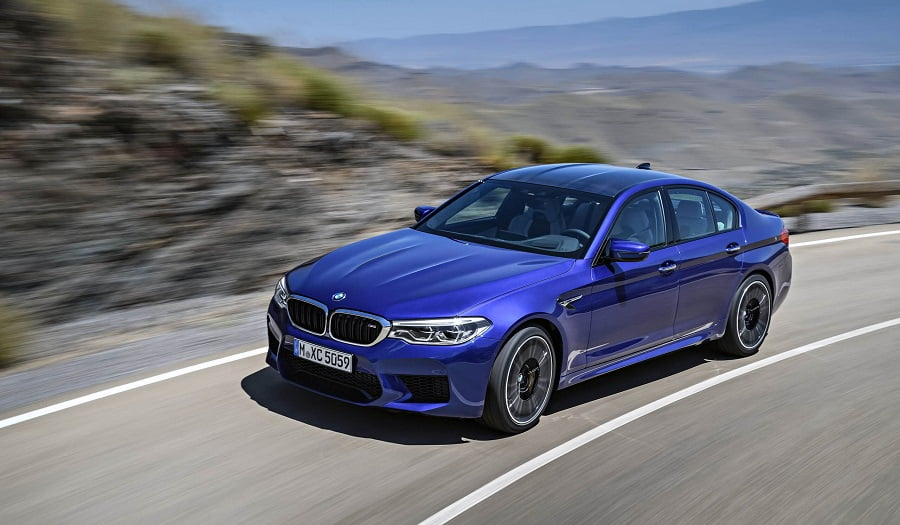 Preparation for the premiere of the new generation BMW M5 Germans began from afar. At first, there was quite a vague information about the transmission and the engine, and before the debut on the Internet they threw a portion of the photo of the premium sports sedan. And let the exterior - not the main feature of M5 of the last generation, we can not bypass it.

The appearance of the new sedan was changed according to the long-known recipe. Several wheel arches fanned, they contained large wheels, rear and front mounted aggressive bumpers with large air intakes, and two standard so-called "double-barrels" were used to replace the standard exhaust nozzles. This is a classic of the genre. On such a car you can easily stand out from the stream.

The salon has also undergone many changes. On a background of furnish under a carbon fiber the modified selector of a check point with red strips is brightly allocated, here there are buttons M1 and M2 also in red color. Both keys are responsible for selecting and saving driving modes, if the standard "workpiece" does not suit you. Also, the new BMW M5 is equipped with a sports steering wheel and seats with more developed lateral support.

It is worth noting the excellent work of the engineers on the revision of the 4,4L twin-turbo engine. To get its 600 hp output. at a torque of 750 N * m, they installed modern Twin Scroll turbines with increased boost pressure, improved the cooling system and increased the injection pressure to 350 bar. In addition to all these new things, the engineers made the car's exhaust system easier and equipped it with Helmholtz resonators. The robotic gearbox was replaced by the eight-speed automatic transmission M Servotovic.

Maximum speed - regulated in Germany 250 km / h, but when installing the M Driver's Package engineers promise to increase the figure to 350 km / h.

In terms of its technical characteristics, the sedan looks amazing, but if you look at its direct competitors, Audi RS6 Avant performance and Mercedes-AMG E 63 S 4Matic +, the advantage will not be so obvious. For example, "Mercedes" dials the first "hundred" for exactly the same time as the "BMW", and the "Audi" wagon lags behind them only for 0,3 seconds. However, you should not blame the Bavarians for misleading someone. The sports sedan BMW M5 of the new generation is really one of the most high-speed cars in its class.

BMW M5 F90 - the first car in its line, in which the rear-wheel drive was replaced by a full one. According to the algorithm of operation the transmission resembles the units of other cars "BMW". The standard operating mode implies the transfer of torque to the rear wheels, and if necessary a front axle is connected via a multi-disk electronically controlled clutch. The active rear inter-wheel differential allows you to redirect up to 100% of the torque to one wheel, in addition, the operation of the transmission is controlled by the control electronics.

Most likely, the Germans foresaw the criticism in their address because of the transition to four-wheel drive and provided for a special rear-wheel drive mode, similar to that used by the Mercedes-AMG E 63. By the way, order the rental of another executive sedan model Mercedes E 213 AMG with a driver you can visit our company "TransLux".

In addition, the designers have worked hard to lighten the sedan. The front fenders and doors, the boot lid and the bonnet are made of aluminum and the roof is made of carbon fiber.

For the sake of efficiency, engineers did not equip the machine with a standard lead-acid battery and found it an advantageous replacement in the form of a lighter lithium-ion analog.

In the basic configuration, the sedan weighs 1855 kg, but if you order optional carbon-ceramic brakes instead of the standard cast-iron brakes with front six-piston calipers, you can further reduce the weight by another 23 kg. But even with cast iron, the new M5 is much lighter than its main competitors.

Changes also affected the sedan's suspension. Engineers have strengthened the design of the front double-link and rear multi-link system. The anti-roll bars have been stiffened, as have the rubber mountings and the front lower arms. The rear axle of the BMW M5 was equipped with an X-shaped steel amplifier, and additional aluminum amplifiers were installed at the front. Even as standard, the sedan has adaptive dampers that operate in three different operating modes.

Despite the fact that the new generation of "sports fives" from BMW will appear on sale only at the end of September, everyone can ask the price of the car today. In Germany, dealers will ask for the basic version from 117 euros, which is 900 euros less from the Audi RS1 Avant performance and 6 euros less than the Mercedes-AMG E 4 S 63Matic +. However, at the same time with sales of "regular M4" the manufacturer will be taking orders for a limited version of the First Edition with a richer "stuffing" in the base and a matte body color. In total, they expect to release 5 copies of such machines, for each of which they will have to throw at least another 400 thousand euros on top.