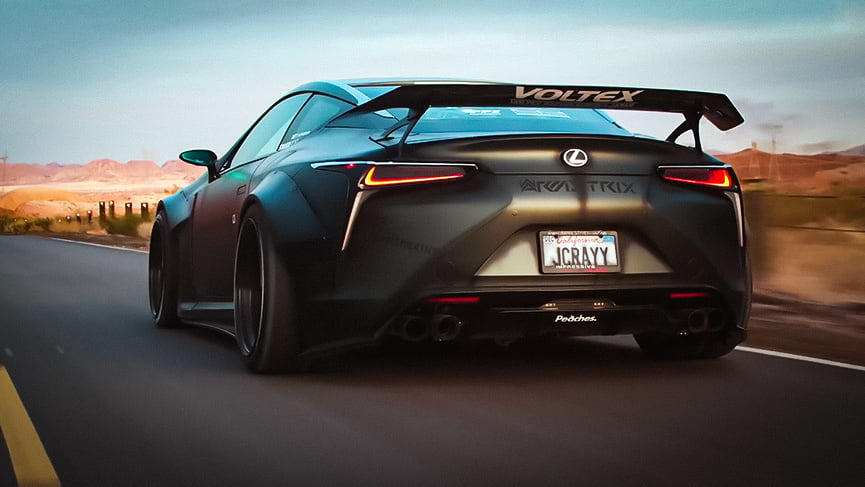 The Lexus LC500 has every chance of becoming one of the most expressive cars of our time. At least it can be called one of the attractive ones. Released recently, it is currently popular in the market.

Their appearance attracts attention and conquers, as regards technical capabilities, they also do not disappoint. However, one of the owners of the Lexus LC500 from the United States, it seemed that this car lacks charisma, he decided to fix it by sending a Japanese coupe to the Liberty Walk tuning studio.

Tuners-masters did not limit themselves to minor changes and additions, turning the LC500 into a Batmobile. The finished vehicle received a wide-body kit, including “aggressive” wide wheel arches. The car was also equipped with a high rear wing with a front splitter, as well as a diffuser characteristic of a Batmobile.

Special wheels with pneumatic suspension drove onto the coupe’s road, thanks to which it turned out to be as low as possible. The overall silhouette was successfully completed by a matte film, which the masters did not regret, wrapping it completely in transport.

The power plant in Liberty Walk was not touched, which is not surprising, since the studio specializes exclusively in body kits. The experts did not manage to find out which modification was lucky enough to turn into the Batmobile, but the characteristics of even the standard Lexus LC500 are impressive. This machine with a 5,0-liter engine produces 477 hp. and 540 Nm of torque, which gives it the ability to accelerate to “hundreds” in some 4,7 seconds.