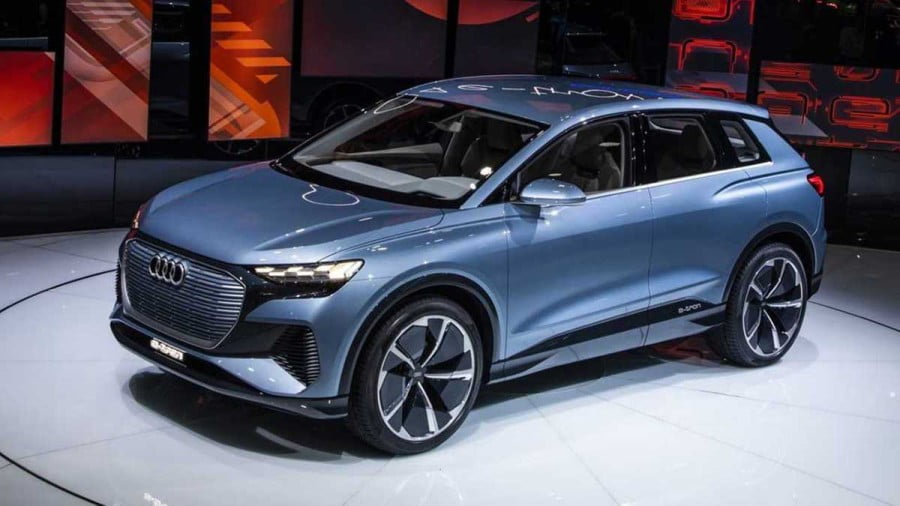 Nowadays, cars are starting to defend themselves. An example is the Audi Q4 e-tron, which has a lot in common with the technical twins from Volkswagen and Skoda, but on the other hand has a completely different approach, i.e. to ergonomics.

Usually premium brands are distinguished by unusual style, gadgets or innovative, not always reasonable solutions. In the case of the Audi Q4 e-tron, things are very different, especially when compared with the Skoda Enyaq or Volkswagen ID.4. Yes, it is Audi that plays the role of the most intelligent model, which looks really cool, but does not try to stand out from the crowd by force. There's no optional illuminated grille, LED panels or eye lights, but it's an eye-catcher, and in the Taifun's tested version with graphite paint, gold rims and black accessories, it performed brilliantly.

At first glance, the car looks a bit like the Q5, but it definitely has nicer proportions and more modern, more dynamic lines. Looking in profile, we can see a rather short front hood and a gently rising windshield. The roof breaks off with a smooth arch and gently leans back. The C-pillar is symbolic, followed by a small window and a shark-fin-shaped rear pillar. It looks very good and adds dynamism to the car.

The center console is raised, and a panel with a gear selector and several switches acts as an island, under which there is room for a phone, USB ports or a cigarette lighter. The traditional air conditioning control panel was placed higher, and a large screen of the infotainment system was placed in the central part. Of course, everything works flawlessly, intuitively clear, pleasant to use and, most importantly, trouble-free even while driving. Buttons will always be a better choice than touchpads, trackpads or screens when it comes to controlling basic functions. I am glad that Audi, after a short adventure with touch screens for controlling air conditioning, decided to return to the classic solutions.

The design is very pleasing to the eye. Noticeable is a rather odd but very well placed steering wheel and triangular, stylized air vents next to a raised panel with a virtual clock. The test unit was dominated by black, gray and silver accents. Perhaps there were too many of these shades of gray, but they matched the sporty nature of the exterior design, and the aforementioned gold rims gave everything an extremely racial look. But looks aren't everything, as there's plenty of room inside this over 4,5 meter long car, especially on the couch. The trunk is also large - holds 520 liters. With the backrests folded down, the trunk volume increases to 1490 liters.